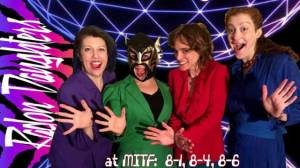 JOIN THE SNAP IT BABY REVOLUTION with THE RADON DAUGHTERS! Four women explore life, love and art and re-define the archetypal bohemian modern woman and the artistic feminist revolution!

This experimental music theatre play written in 1984 by Bronwyn Rucker is now under the direction of Jason Ellis starring Evelyn Sullivan, Tatiana Grey*, Rachel Murdy*, Kate Ruby Klenfner, and Anna Foss Wilson*. See how 1984 leads us to 2016! Anything can happen…”and as President” …SNAP IT BABY! (Musical-experimental; abstract Feminist/Futurist)! (*AEA)

In 1984 Radon Daughters was produced by the experimental theatre company, Meltdown Performing Arts on the streets of Brooklyn and at Coney Island’s Sidewalks by the Seashore. Radon Daughters eventually developed into a pop opera by Bronwyn Rucker and Woody Regan and was performed in cabarets in Midtown and the Village. The music has been documented in a CD, Radon Daughters on Original Cast Records. The version presented in MITF is the original poetry and is the new beginning of this avant-garde adventure. 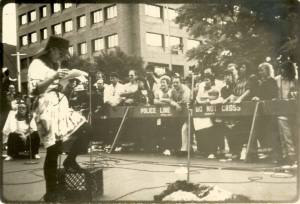 Another Meltdown production, John Cage Meets Sun Ra, was reissued in June by Modern Harmonic on LP and CD. This historic concert took place in Coney Island at Sideshows by the Seashore. It is truly terrific that these 1980’s revolutionary productions are finding great relevance today!

John Chatterton’s Midtown International Theatre Festival sets the gold standard for presenting new and exciting independent theatrical works in New York. This year – with a booming variety section, a prominently-placed Short Play Lab, a burgeoning Short Film Lab, nearly 60 productions – with a record number of musical presentations (including an opera) – as well as an astounding number of international works, the 17th Annual Midtown International Theatre Festival once again proves itself to be one of the best reasons to stay in New York in July!

For ticket and additional info: http://www.midtownfestival.org

In one of our biggest projects to date, we had the honor of staging a new play for last year’s Nightmare Horror Halloween Festival.  I wrote a one-act called Night of the Touching Zombies.   Our production stood out amongst the bone-chilling fare of the festival, by not being particularly scary.

Well, occasionally we would earn a legitimate shriek from some zombie-averse bystander, but ultimately we skewed more towards the ‘cute’ side of the cute-to-terrifying spectrum.

Here’s how it went:  The play opens on the exterior of a small Ranch-style suburban house. The audience is immediately assaulted by a brigade of undead, and by my I-wish-I-was-John-Carpenter Night of the Touching Zombies Musical Theme

From there, we follow the struggle for survival of a suburban couple, Barbara (Anna Doyle), and Myron (Owen Scott),  after an unexpected zombie apocalypse.

Capable Barbara soon finds herself taking refuge in the nearby Rambler.  The house belongs to a woman of questionable mental acuity, who will only identify herself as “Grandma”

Meanwhile, Myron is having a terrible time of things after accidentally turning himself into a zombie in the first scene.

After tuning-in to a questionable emergency broadcast, the group resolves to stay indoors, and turn Grandma’s rambler into a fortress.  But after only a few days of each other’s company, they all go quite mad.

I won’t spoil what happens but I can reveal that the play, predictably, ends in a maelstrom of Zombified chaos, and a funk/soul hip-hop mashup.

We loved doing this show so much.  Everybody was terrific in it.  We ripped an old woman in half onstage.

We used cloth and paper as substitutes for liquid blood, and then splattered it all over the place.

We kicked zombies down an imaginary hill!

All in all NoTZ was a phenomenal experience for us.  Tim Haskell and Paul Smithyman, The Nightmare Horror Show team, were a joy to work with.  The other shows in the festival were all extremely creative, artistically competent, and pretty scary!

We had some technical hurdles the first few nights.   But the best part of this whole experience was that we had enough performances in the run for the cast to really get the hang of the show and hit an tremendous stride.   Our ‘off’ nights were fun, and our ‘on’ nights were thrilling.  We scared some kids, gave some people joy and made some great friends.

Thank you all for coming out to make World War Bee a success! We had a blast working on this one. For those of you who are interested in the behind-the-scenes magic, our Bear onesies were purchased from Big Feet  & felt emblems were crafted from supplies at Michael’s. We made the Bear ears and Pony ears based on templates found on Pinterest and YouTube. And finally, we know the question on every audience member’s mind: Were those fake Pony butts? Mate with me and I’ll tell you!! OK OK, yes they were fake and they were crafted based on this YouTube tutorial. I actually just free-hand drew the templates on a pillow case- 1 pillow case was enough for a full set (2 haunches & 2 buttcheeks) and they were fine under 2 pairs of leggings- no tights needed.